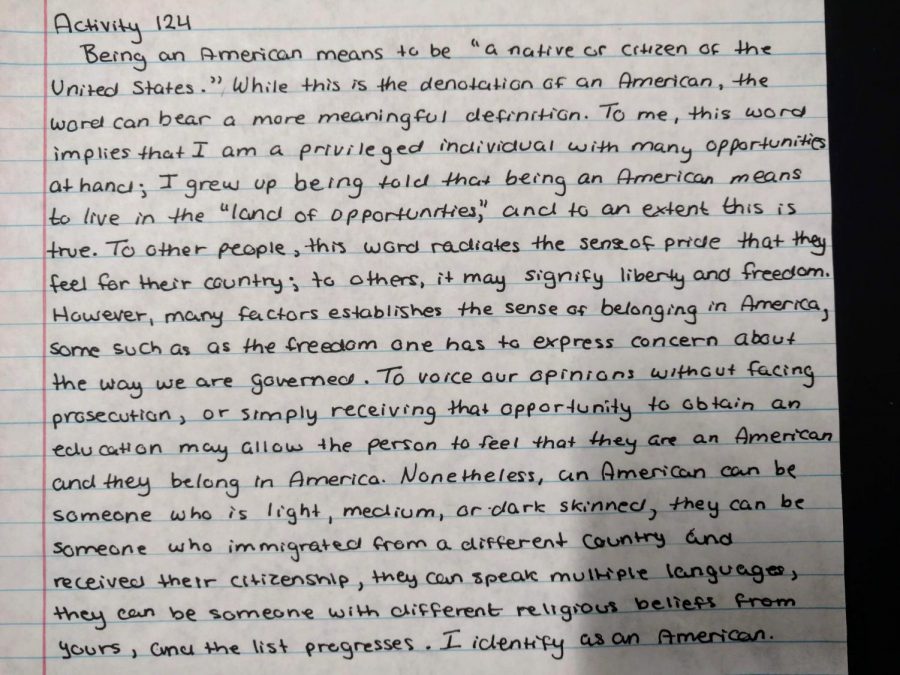 Recently, Mr. Shiffman, senior English teacher, assigned a short free response as homework to his twelfth grade AP class. The prompt was, “What does it mean to be an American? What makes a person feel that he or she belongs in America? Has the concept of being an American changed over time? Are there some ideas that have remained consistent or endured through our country’s history?”

The PAW newspaper had the privilege of reviewing these responses and selecting several to print in our newspaper.  They are as follows:

In my opinion, the concept of being an American has drastically changed over time, evolving with decades and centuries. From the Declaration of Independence in 1776 to the present, American ideas have gradually changed by reflecting the issues and ideas ushered into society by each new generation.

In the beginning, the untamed forest and plains of the New World suggested exploration and new opportunities. This concept of America was a stepping stone towards the bigger things America would become. In the 1800’s America began to open up to equality and freedom. In the 1900s, these ideas were only strengthened and more clearly defined. During this era, the American dream took form, suggesting prosperity to everyone who ventured in; however, dark times underlie the hope that was the American dream. Immigrants, especially, fell into this trap. In spite of this, the dream was a major factor in America’s identity. These ever-changing American Concepts were similar; therefore, this makes the future of the nation easier to predict. I do not believe the concept of being an American will stay the same, but it will reflect the past, whether good or bad. Today, being an American is highly dependent on the belief that everyone should freely express their opinions and fight for what they believed in, which found its roots in America’s older ideal of equality. Being an American now means you are strong in your beliefs. Women do not hide behind men. The poor do not need to be crushed by the wealthy. Everyone has a voice in an opinion. This is America’s concept today.

Although the concept of being an American has changed over time, there is one consistency. The one truth about America’s identity that will never change is the idea that America must always change. The United States will never stop evolving, growing and learning from its own history. Paradoxically, change is what makes America stay the same at its core.

Being an American means to be “a native or citizen of the United States.” While this is the denotation of an American, the word can bear a more meaningful definition. To me, this word implies that I am a privileged individual with many opportunities at hand I grew up being told that being an American mans to live in the “land of opportunities,” and to an extent this is true. To other people, this world radiates the sense of pride that they feed for their country; others, it may signify liberty and freedom. However, many factors established the sense of belonging in America, some such as the freedom one has to express concern about the way we are governed. To voice our opinions without facing prosecution, or simply receiving that opportunity to obtain an education may allow the person to feel that they are an American and they belong in America. Nonetheless, an American can be someone who is light, medium, or dark-skinned, they can be someone who immigrated from a different country and received their citizenship, they can speak multiple languages, they can be someone with different religious beliefs from yours, and the list progresses. I identify as an American.

To be an American in the geographical sense is being born in the U.S. Despite this, people who have immigrated from other countries and that live in the U.S. are also considered Americans. To be an American is to believe in freedom, opportunity and the chance to carve one’s destiny. The first immigrants considered themselves British and still retained most of their culture. By the time that the Revolution happened, those newer generations had developed their own identity, which they believed had changed from the British identity. However, most of them forgot their origins and rejected the immigrants that were just like their ancestors, who sought refuge and freedom; Freedom that was granted by the constitution. Recently this belief has been increasing, that you’re only American if you were born in the country or if you speak English. That is a mistaken view. An American can be born in the U.S., naturalized, a permanent resident or an illegal immigrant. As long as they are willing to let their views be heard and that they fight for freedom, are an American. That is why the Civil Rights movement, the women’s suffrage movement along with the Chicano and the Asian movements are the definition of America. Because being an American means cherishing our own culture while also embracing the American identity.

The concept of being an American has definitely changed over time. Before the American Revolution, Americans were educated Europeans who were typically Christians. When the Constitution was written, Americans were technically only white Christian males. Today, many Americans view first-generation immigrants as the ones who are not Americans. The general opinion is that anyone who is a citizen of American is an American, although, some Americans are reluctant to accept non-English-speaking American citizens as Americans. “Shill, in any experience, Americans are people who value individualism, Although Americans have different definitions for “individualism,” they all value individual choices. My personal definition of American is someone who desires to live true to themselves while also someone who defends others’ right to do the same.

Change is inevitable. This unavoidable change comes to mind when I think upon the concept of what it what makes a person American. In early colonial times, the simple act of living in the “New World” was enough to classify a person as American. Anyone, regardless of their race, religion, or ethnic background, could come to this country in search of a new start. Those in search of their own American Dream were welcomed by others who, although they were different on the surface shared the same dream for a better life. Fast forwarding into 2019, one cannot become “American” in the eyes of society until certain requirements are met. For some, if you don’t speak, look, think or share the same opinions as those around you, you are not an American. If you wish to express your culture openly, then you risk becoming an outcast, whether or not you pass a ten question test is one of many ways that you can be closer or grow further from becoming American. My father, who has lived in the United States legally since he was sixteen, was nearly separated from me and my family because of a mistake that was discovered after his perfect score test was reviewed. The fear that my own country might not let my father stay with us is a feeling I will never forget. However, the American dream for equality and peace is alive within many people. They accept newcomers with open arms and welcome diversity. In any case, no matter what viewpoint one looks at the situation from, the concept of being an American has undoubtedly changed and will continue to do so as the country grows and develops.

For a person to feel that he or she belongs in America, it is important for them to have a sense of community. This would be family, friends, or even co-workers spending time and including this person. Secondly, being able to communicate with others is very important to having a sense of belonging. When an immigrant learns the native language of the country, more opportunities are opened up to them; such as jobs and friendships. Third, equal treatment is important for a person to feel that they belong. If a person is singled out and discriminated against, they might feel even more uncomfortable and unwelcome in America. Finally, obtaining citizenship and having the same rights as Americans will help an immigrant feel a sense of belonging and acceptance in America.