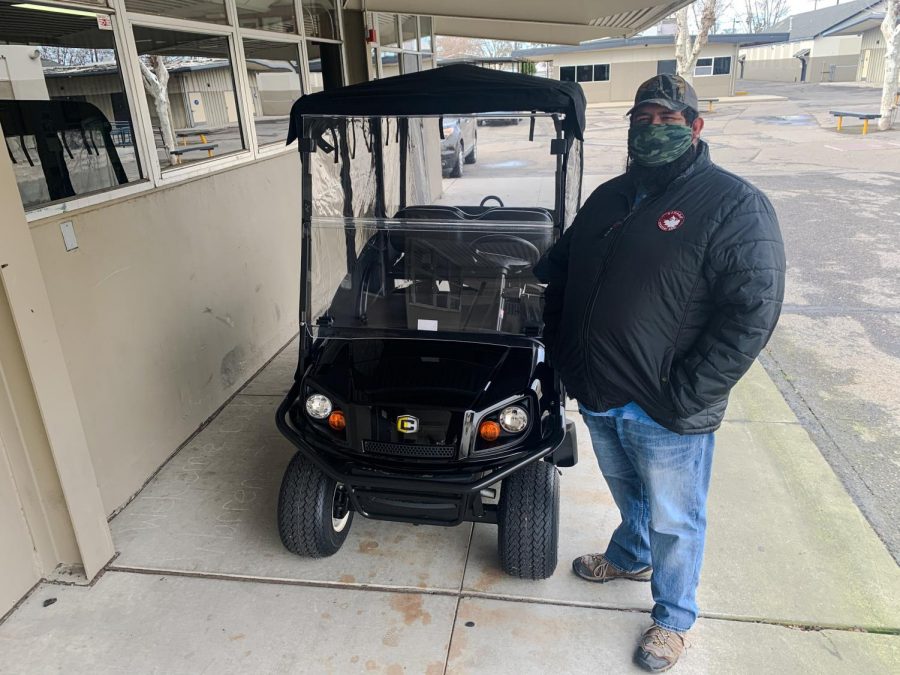 Julian Padilla, HHS campus supervisor, stands next to one of two new fully electric golf carts the school has recently received through a grant.

Recently, the staff of Hughson Highschool has gotten their hands on two shiny new golf carts, more specifically, 2 brand new 2020 Cushman shuttle 2+2 48 Volt Electric Vehicles. Some may wonder, why use a grant on 2 new carts? Well, the previous carts, 2002 and 1993 models respectively, had a battery issue, and to simply replace a battery for the carts would have cost the school $800 dollars each, totalling up to $1,600 dollars.

A main question one could ask is, why? Why a new cart for the school, and what purpose did the older carts have? Well, the purpose of the carts was to ensure the safety of students here at HHS. Making transportation around the school’s campus quick and easy, the staff use the carts to monitor student activities. They (the carts) are also used when there is a sporting event, being used to bring back and forth materials and equipment for the team, coach, or referees. Along with that, one of the two carts is equipped with an AED in the case of an emergency.

“I believe the  staff seems to be excited about the carts” Says HHS assistant principal Mrs. Moring.  According to her, HHS received the two carts via a grant, approved by the school board and the San Joaquin Valley Air Pollution District Grant Committee. The carts also have enclosures around the top and sides to protect from harsh weather like heavy rain or hail, but those are said to be being removed when the hotter weather comes along.

What happened to the original carts? Well, the school donated them to a good cause, as Mrs. Moring said “It’s nice to have new electric Vehicles that we can use to ensure student safety!”